THE LANGUAGE OF DEATH

todd moore died friday, march 12, and after recovering from the devastation of losing a close friend to a sudden death, i couldn’t help but realize the irony of his death at a time when he had written so thoroughly about the death experience. for i have not known anyone who wrote so intensely about death and particularly in recent years. no one who approached the dying experience from so many different angles. no one who transferred the experience of dying like todd moore in his writings. it was almost as if death itself were talking through todd. two of my favorite death pieces are in a three poem collection, THE DEAD ZONE TRILOGY, st. vitus press, 2005. the first piece is the corpse is dreaming, which is about the dreaming corpse of john dillinger:

for me, the corpse is dreaming is a poem which challenges the motion picture as an art form, for it is a poem-movie that in many ways is superior to the actual motion picture and the subject is death:

it’s as if todd is talking to us before and after his own death through the mini-movie that is the poem. dillinger talks about his ghost brother, lawrence, who has a face that resembles his, and in one of the most poignant passages in poetry, he makes the poem-movie come alive:

this poem builds with characters and internal dialogue to give a stream of consciousness that is a new movie, a poem-movie. it is better than a movie because it immediately enters the unconscious and plays there. todd moore, through dillinger, talks to us about death:

todd moore knew that the only way to whip death was to transcend death through language. and his most intense transcendence would be the language of death. the corpse is dreaming is a new art form, the poem-movie, in which death talks from a dreaming corpse. a second poem in the collection, the night corpse, is just as revolutionary in terms of language. it is black energy. it is pure, subliminal force, and the poem carries the force. the line is stripped down to its essence. the poem is stripped down to its essence. it is the black hole of language. in the condensed line of death with tourettes syndrome:

death is talking again, but this time in fragments, in semi-consciousness, in an even more subliminal language, where everything is stripped away but the bare bones of words. and the reader must enter the maze of syllables to decipher the heiroglyph:

this is a rare stretching and breaking and condensing of language. death is speaking through the unconscious of dillinger:

i have never seen anyone burn with creative passion as todd moore did in the years prior to his death. he had always been productive, but he reached another level of creative energy in those years and went out in a flame, a blaze, a fire. he was about constant creativity. he was fascinated with death conversations, thoughts and ideas in the process of dying. he imagined these interior monologues and dialogues through the figure of john dillinger in his poems. i have never seen death as such a dynamic force. in the poems of todd moore, death and the language of death become something else. they become a final and lyrical chant for life. 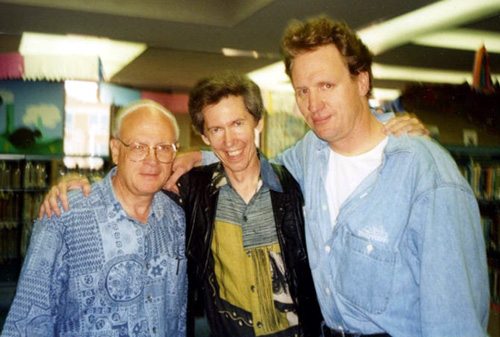 0 Replies to “tony moffeit | the language of death”