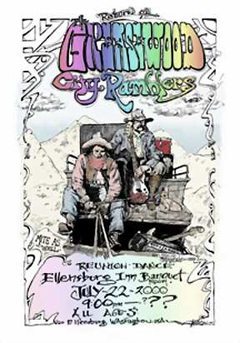 Click the poster above to read also John Bennett’s The Greasewood City Ramblers and a quarter century of Ellensburg dance music.

Dancing the Night Away

Thirty years ago at the first Cornerstone memorial I jumped up on stage at the Ranch Tavern while Lucky Pierre was playing, ripped off my t-shirt, and set it on fire.

The music stopped and two big guys yanked me off stage and threw me out the door into a 10-below snowy night.

This was two weeks after Cowboy Bob and I had smuggled about fifty snowballs into the Ranch and started a full-blown snowball fight, and my welcome was wearing thin. The owner came out to give me my coat so I wouldn’t freeze to death, and after a short heart-to-heart he let me back in.

This past Saturday some local musicians from that era got together and, calling themselves The Sons of 51, played a gig at a downtown restaurant. I strolled in wearing my Greasewood City Ramblers t-shirt with the vague notion of repeating the t-shirt ritual, but if I’d failed to get the message across thirty years earlier, I certainly wasn’t going to succeed now–the place was packed with well-dressed, gray-haired, stable people who since the Ranch burned down (I had nothing to do with it) had had a career and raised a family. Setting my t-shirt on fire in that atmosphere wouldn’t result in a heart-to-heart with the owner out in the parking lot, it would result in my arrest and having my name put on a pyromaniac’s alert list.

So, I kept my shirt on and danced. I danced until I was glistening with sweat, and when the whole thing shut down at the preposterously early hour of 11:30, I walked home, stripped down, and holding my t-shirt over the kitchen sink in the dark, set it on fire.

“Come on baby, let the good times roll,” I whispered to my reflection, wavering in orange flames in the glass of the window.

Then the fire went out and there was only darkness and the smell of the ashes of a time long gone.