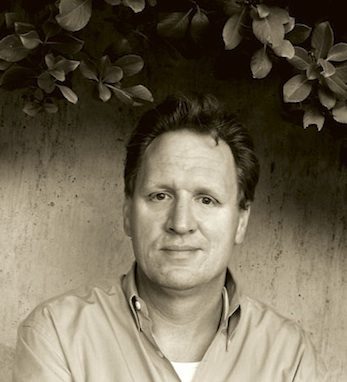 If you think that being a first-generation Irishman from South-Central Los Angeles makes Lawrence Welsh stand out in his adopted El Paso, Texas, you’re right – it does. But that’s mainly because he wears his heart, his story and his heritage on his sleeve. Welsh is a poet and a college teacher of literature. That brief description, though, might conjure up too genteel an impression, as one reviewer has called his most recent collection a “muscular, sometimes menacing antidote to the anemic chapbooks by which some poetry is dribbled as tightfistedly as rain on the Southwest borderland.”

The news that he was once a punk rocker could also be misleading, as another critic said that after reading a couple of pages of his poetry “your breathing begins to slow, [t]he heart steadies, and, reluctantly, the mind quiets.” Whatever the case, “Begging for Vultures: New and Selected Poems 1994-2009” has won the New Mexico-Arizona Book Award and a Southwest Notable Book of the Year Award. Welsh said the poems focus on his above-mentioned family background, his role as a founder member of the punk band the Alcoholics (between 1979 and 1982), his time spent as a daily newspaper reporter in L.A. and his years “tripping around Texas, New Mexico and the rest of the Southwest.” He added: “There are also internalizations and ruminations about Catholicism, alcoholism, prayer, gang warfare, meditation, escaping Los Angeles, beach culture and mysticism.” “Begging for Vultures,” published by the University of New Mexico Press, is in its second printing.

What is your writing routine? Are there ideal conditions?

As the son of an Irish immigrant mother and an Irish- American father, I grew up in a blue collar Irish-Catholic home. I’ve never known any “ideal” conditions, and I’ve never been blessed with any sort of writing “retreats.” Trained in college as a daily newspaper reporter, I learned the importance of writing every day. I don’t make a big deal out of it. I just get something done every day. It’s remained that way for 30 years.

What advice do you have for aspiring writers?

Read and write on a daily basis; read widely and deeply. If you’re a journalist or a fiction writer, make sure and read poetry. I think Ted Berrigan, the great Irish- American poet, said that every writer must start out with at least 100 books of modern poetry. Find out what works for you and then dive in. And don’t worry about rejection; it will find you, as it has me, constantly.

Name three books that are memorable in terms of your reading pleasure.

Can I name five? I’ll keep this answer focused on the Irish. “Opened Ground: The Selected Poems of Seamus Heaney; 1966-1996”; “True History of the Kelly Gang” by Peter Carey; “The Collected Poems of Michael Hartnett”; “Suttree” by Cormac McCarthy; “The Westies” by T.J. English.

What book are you currently reading?

There’s never “a” book, but there are books, all going at once. Here’s a sampling: “Paddy Whacked” by T.J. English; “Time Without Number” by Daniel Berrigan; “Grave of Light” by Alice Notley; “Consideration of the Guitar” by Ray Gonzalez; “The Collected Poems of Richard Murphy”; “The Collected Poems of James Wright”; “The New Oxford Book of Irish Verse” edited by Thomas Kinsella.

Is there a book you wish you had written?

Name a book that you were pleasantly surprised by?

I can’t finish most novels; however, I’ve read many that have changed my life. I fell in love with Alice McDermott’s “Charming Billy.”

If you could meet one author, living or dead, who would it be?

What book changed your life?

“On the Road” by Jack Kerouac.

What is your favorite spot in Ireland?

Up the fields of Coolaholiga, Nenagh, Co. Tipperary, where my mother was born.

You claim it, and you carry it in your blood. 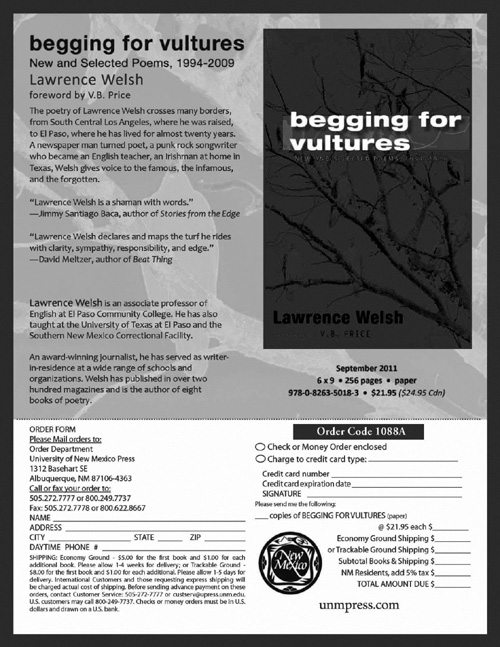 Begging for Vultures: New and Selected Poems, 1994-2009
By Lawrence Welsh