moments earlier
Rat, who had drunkenly transported us downtown
in his blue van, is taunting a bloke
at the next table-
“So do you reallythink that you are someone important?”

his knees pinning the torso of one poor bastard

each uppercut a crude reminder
of the savagery of those
who fucked with us.

On the night for me
there was no awakening,
no sense of outlaw epiphany

as if it was all my doing.

One afternoon
he showed me
a 12 inch scar
slashed
across his rib cage
which buckled
into the centre
of his stomach.

Said he caught his wife
in bed with a Lebanese
bloke from the machine shop
at work.

Said he walloped the guy
with an tyre iron
across the face
no questions asked
& hospitalised him
for a week.

He reckoned the violence
was instinctive
rather than planned
& a month later
he got jumped
& was seriously knifed.

Things whirled madly from there
for the mad Kiwi.

When he recovered
he left for a diving gig
in Saudi Arabia
checking offshore petroleum pipes
for leaks.

Said to me the water was so murky
he often could barely see his own hands.

A few months later
his sister contacted me

I recently encountered this bloke
at the Forest Lodge Hotel in Sydney
said he befriended Charles Bukowski
when he lived on De Longpre Avenue
so he could pilfer & on-sell some of Buk’s
early limited first edition chapbooks.

He told me his primary goal was to obtain a signed
copy of It Catches My Heart in Its Hands Flower,
Bukowski’s first book published by the Webbs in 1963.

He reckoned he arrived at Buk’s bungalow unannounced
with two 6 packs of Miller High Life, a fifth of rum
& a young whore from El Salvador
he had bumped into outside Ned’s Liquor Store
shaking the last peach of her youth in a tight red skirt.

About 3 am Bukowski slipped out for a piss
And the bloke said he bolted for the door.

He felt a strong hand on his shoulder,
“What do you have in your bag, my friend?”

He told me he was totally confident
he wouldn’t be found out,
having sewn a secret compartment
into the bottom of his West German army haversack.

“Sure thing, mate,” he said, unzipping his bag
& handed him a signed copy of his latest book of poetry Fuckwits & Angels.

“Fuck that”, Buk said, “I don’t read other people’s shit!” & flung the chapbook
out of the open window. The thief used the diversion
to escape the apartment.

“No idea man. I stopped dealing in his turds a couple of decades ago.” 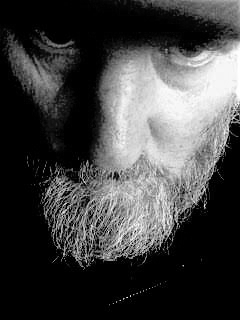 George Anderson grew up in Montreal and migrated to Australia in his early 20s. He is long-term editor of the student poetry anthology Ephemeral and blogs at BOLD MONKEY. He has published hundreds of poems since 2001. Recent publications or forthcoming include Ramingo Porch #3, Asylum Floor #2, Lummox 5-7, broadsides by 48th Street Press and Holy & intoxicated Publications, Teaching My Computer Irony– Punk Chapbook Series Epic Rites Press, In Between Hangovers, Your One Phone Call, bad acid laboratories, Boy Slut, The Dope Fiend Daily, DEVOTE & other choice small press publications.

One Reply to “Three poems by George Anderson”