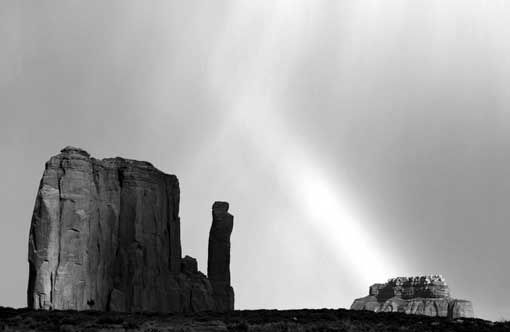 More than fifty years ago when I first got the idea that I was a writer, I remember my old man telling me during one of his classic binges, kid, he used to like to call me kid when he was drunk out of his skull. Kid, he said, if you’re gonna be a writer, stick to the novel. It’s your whore, it’s your bitch, it’s your fantasy lover. Stay away from the poem, cuz boy the poem doesn’t pay shit.

But, strangely enough, after 1950 the pairings have been less and less easy to make. We could compare THE ADVENTURES OF AUGIE MARCH to THE MAXIMUS POEMS. We can conjure INVISIBLE MAN and HARLEM GALLERY. We could marry BLESS ME ULTIMA to Creeley’s COLLECTED. We could hook THE KID up with GUNSLINGER. We not only could but are almost required to fuse HOWL to ON THE ROAD. Or how about POST OFFICE and POINT BLANK, both much later than 1950. Feel free to fill in the blanks for your own favorites. Still, somewhere after 1950 it has become more and more difficult to find the sparks going back and forth between THE GREAT AMERICAN NOVEL and the great american poem. And, it is just there, in those sparks that the american psyche is located. It isn’t just in the novel or the poem but it is in both, in the fireworks of both, that you’ll discover what it means to be a writer in america.

After the 1970s you really have to work hard for the pairings. There is LETTER TO AN IMAGINARY FRIEND but it has no 1970s contemporary novel that comes to mind. You have to go back to 1939 and THE GRAPES OF WRATH. And, of course, Leo Connellan’s CROSSING AMERICA is a natural partner for Cormac McCarthy’s THE ROAD. Or, how about Kell Robertson’s A HORSE CALLED DESPERATION and Tom Lea’s THE WONDERFUL COUNTRY?

During the last fifteen or twenty years I have read so many bad long poems, so many boring long poems, so many weak long poems I am sick to the guts and I am sick to the spirit of what passes for the great american poem, especially in the mainstream press. If I never read another ho hum page of John Ashbery, I will be supremely happy. If I never see another crossed out line of Susan Howe’s I will be ecstatic, if I never see another faux symbol page from THE TABLETS (inside joke or no inside joke) I will be lauging beyond laughing. The reason, amigo, nobody reads poetry anymore is that it has been theorized so thinly and delicately you can’t even find it on the written page. In short it is a joke no one finds funny anymore. 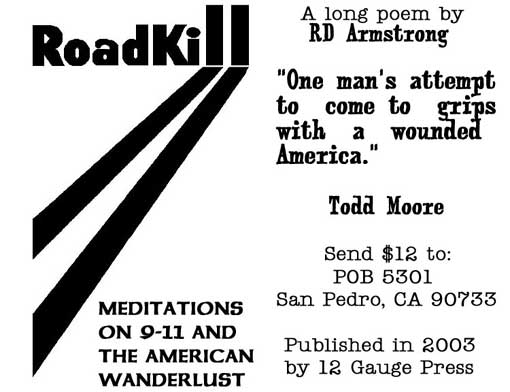 When you work in the small press and specifically when you are an Outlaw Poet, you have to do it all. You have to write the poem, often times you have to become your own best editor, you have to more often than not become your own publisher, you have to find the people who will review you, you have to distribute the book you publish, and because of the net, you have to invent or reinvent whoever the hell it is that you are. If you are shy about this, if you are the least bit reticent about getting your name out there, you are dead. You are deader than dead. The half horse half alligator brag still applies. And, I have plenty of YAWP left in me.

Which translates into — there is nothing timid about me. That’s why I am going to suggest to you the final pairing of novel and poem. Maybe, suggest is too tame a word. Lets just say I am going to tell you because TELL is what I do.

The two books which probe the psyche of america more powerfully than any other novel or poem published during the last twenty years of the 20th century or the first decade or more of the 21st century are Cormac McCarthy’s BLOOD MERIDIAN and my long poem DILLINGER. When I say probe what I really mean is that both BLOOD MERIDIAN and DILLINGER actually are trenching back into the deepest parts of the american psyche. Both novel and poem are powerful and authentic extended works of the contemporary literary imagination or whatever passes for it in the kicked and fucked wreckage of this nation. Both novel and poem present violent scenes as unflinchingly as anything written in the american language. Both novel and poem inquire into the origins and essence of the violent scripts and fantasies of the american dream. Both novel and poem run counter to what it means to live in a civilized country. Both novel and poem present variations on the essential archetypal american. No other novelist since William Faulkner has attempted that. No other major poet has ever tried that, and you can search Pound, Williams, and Olson a very long time and never find anything that even comes close to what you will find in DILLINGER. And, no other novelist or poet writing today has equaled these achievements. They represent the dream and the nightmare of america. The Name is Dillinger

6 years in the making this blows any other “spoken word” CD out of the water. With a .44 magnum. ( I usually run for cover whenever someone uses that term “spoken word” – leave that one for the wussies.) Todd illuminates the abandoned soul of John Dillinger. Dino breaks open the Gates of Hell. Not for the squeamish. When an hour of Dillinger was broadcast over the radio one Sunday afternoon back in 1997, KUNM was inundated by calls from frightened listeners, huge flocks of crows blackened the skies over Albuquerque, and the churches had record attendances for that evening’s observances.