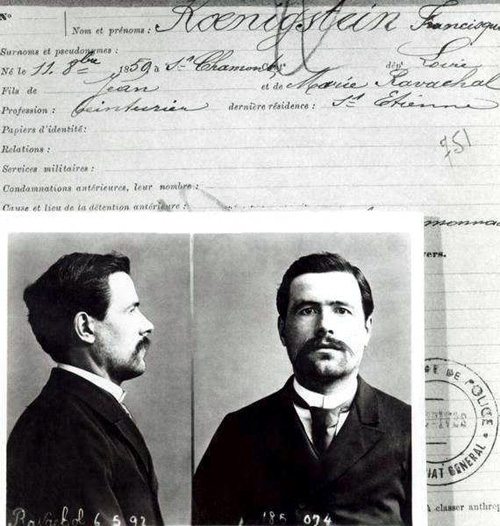 Children of the same fatherland
Can’t you hear the voice
That cries out for democracy.
To arms against the bourgeoisie.
Let’s fight for independence
And for sacred liberty,
Through the efforts of our might
Let’s transform society.
Why, on this earth,
Do we betray ourselves
When we should love each other as brothers?
Our masters cause disunion;
Let’s chase away authoritarian chiefs
Full of hatred and iniquity.
Peoples, let’s suppress our borders
To the cry of “Long Live Equality!”
In order to establish equality
You need a heart full of hate.
Reduce the bourgeoisie to dust
Them instead of war
We’ll have brotherhood.

For a period in the 1880’s Ravachol earned his living as a musician. A contemporary passed down the lyrics to one of his songs.

On the morning of July 11, 1892 Ravachol was executed. The following telegram was sent announcing his death.

Justice was done this morning at 4:05 without incident or demonstration of any kind. He was awakened at 3:40. The condemned man refused the intervention of a chaplain and declared that he had no revelations to make. At first pale and trembling he soon demonstrated an affected cynicism and exasperation at the foot of the scaffold at the moment preceding the execution. In a hoarse voice he sang a few blasphemous and revoltingly obscene lyrics. He didn’t pronounce the word anarchy, and as his head was put in place he gave out a last cry of “Long Live the Re…” Complete calm reigned in the city. Report to follow.

The authorities assumed that the word cut short by the blade was “Republic,” but it is clear that the word was actually “Revolution.”

Much more on Ravachol can be found by clicking here…