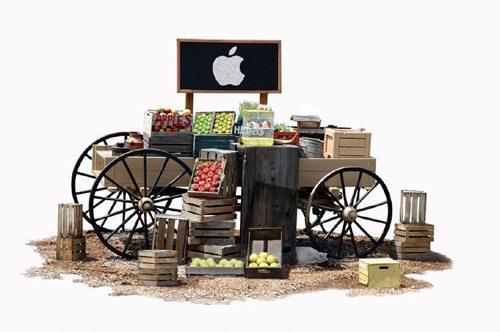 The overturned applecart. Where did all those apples comes from? The jolly green giant? No, he was into beans and lived high in the clouds. He made big money and didn’t have to come down off his high horse to peddle apples.

Where did the vendor disappear to after the cart overturned? Did he speak broken English? Inquiries like these keep the busy bees at Homeland Security buzzing.

See how far we’ve disintegrated since the day of the five-cent apple, the days of the counter culture, hot babes in blue uniforms pouring joe* into mugs?

There aren’t many left who haven’t traded their pounding hearts for a pedigree, who’ve got the guts to squirt hemlock in the henchman’s ear, who can tie up the loose ends. The apple vendor might be one of them, but we’ll never know unless Sherlock Holmes rises up from the grave and gives hot pursuit, smoking who knows what in that pipe of his, frying pipsqueaks into ash with his over-sized magnifying glass. Homeland Security sure won’t get the job done, they don’t have the apple vendor’s profile in their data base.

The past is black gunk gumming up the works of the megabyte mind.