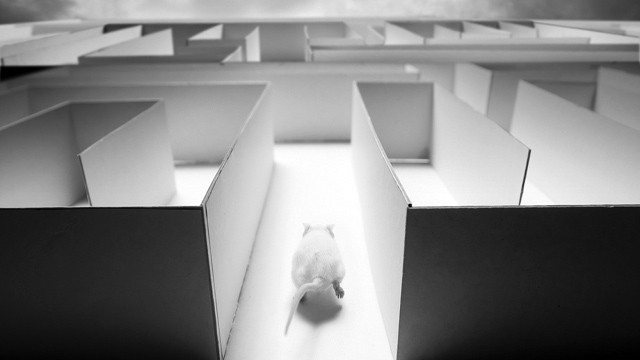 A rat that has unsuccessfully
wandered through a maze
for thirty days
on the morning of the thirty-first
with no rehearsal or apparent deliberation
began to climb the wall.

Scant minutes
after the stroke of midnight
on September 14, 1774,
a draftsman in the service of the queen
put down his pencil
to answer the ringing of a triangle at his door,
found no one there,
and upon returning to his desk,
began immediately drawing wings
and buttresses that heretofore
did not exist.

Doggerel lapsing into poetry,
life rising from the slab,
Lazarus, Sibelius, Kant,
an atomic particle spinning off
and becoming mitochondria, nonchalant
and glib.

Tongues of fire,
the arrival of seeds and flowers
which came so quietly in a world
of dark and monstrous rock.

All oozings, hyperfribulations, and stutters
awaiting coalescence,
things which merely happen
like the arrow that escaped the sky,
or turn up in the world like islands.

A tribe of nomads in the desert
who one day look around
and suddenly conspire
to build a boat.

The words “I will fight no more forever..”